These four yellow umbel (flowers arranged on branches like umbrella spines) plants bloom in June with their lofted blooms and deeply cut or divided leaves showing their relation to carrots and parsley. All grow in full sun to open oak woods, dry to moist. 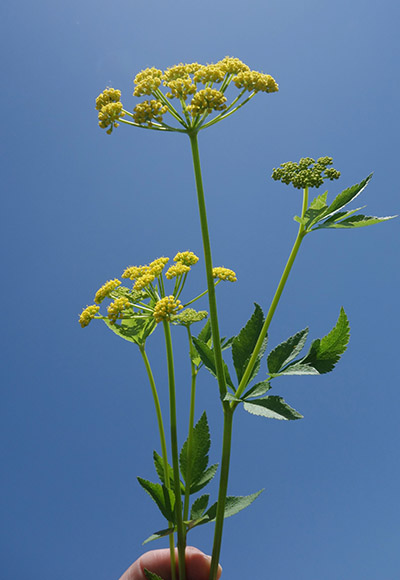 Heart-leaved golden-Alexander (Zizia aptera): Knee-high. Leaves on stem resemble those of the common Alexanders, but leaves at the base are distinctly heart-shaped, finely toothed and often bordered with an intense dark red (but not always). Tends to grow in medium to dry soil, bright sun. Early June. 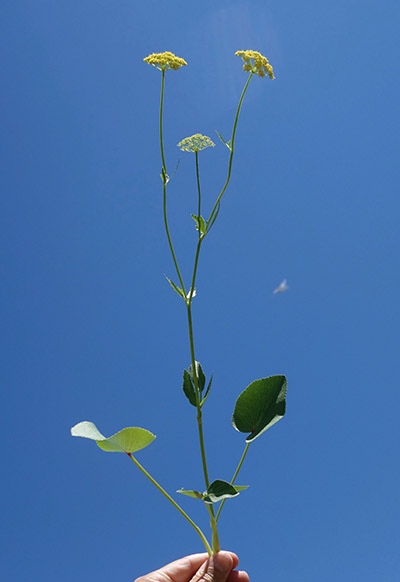 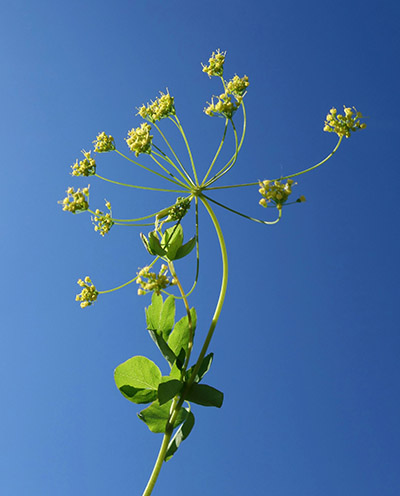 Wild parsnip (Pastinaca sativa): Invasive. Waist- to head- high. Stems with vertically running ridges. Lower foliage a ladder-like arrangement of 5-9 separate leaflets; upper leaflets in groups of 3-5. Always toothed. Umbels form a more flat-topped appearance than any of the preceding species. Full sun, moist to dry. A close relative of the domestic garden parsnip, this non-native pest contains clear sap that causes blisters on the skin about 2 days after contact. The quest to control this plant inspired the creation of the Parsnip Predator, offered for sale by TPE. 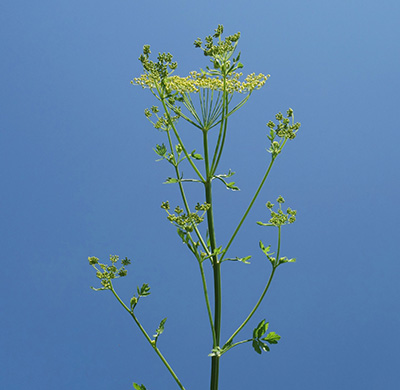 Look out! Photo by Rob Baller

Two towering relatives in the carrot family. Both reside in damp, springy places and become man-high with baseball-sized clusters of flowers presented in umbels. Both bloom in early June.

Angelica (Angelica atropurpurea): Tends to be the first to bloom. Taller than Rob. Flowers are grouped into spheres, whose sub-groupings of tiny flowers form yet smaller spheres. Flowers greenish-white to purple. Stems dark purple and smooth. Prefers squishy wetlands; if you're next to it, you’re in water up to your ankles. Full sun. 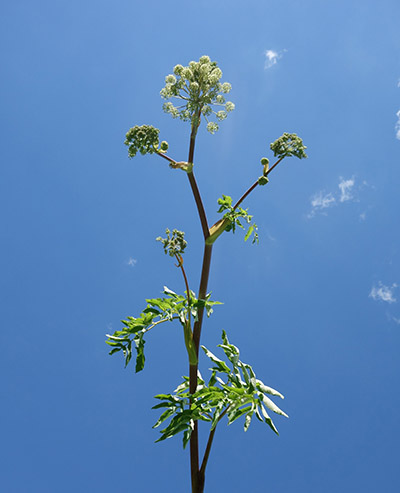 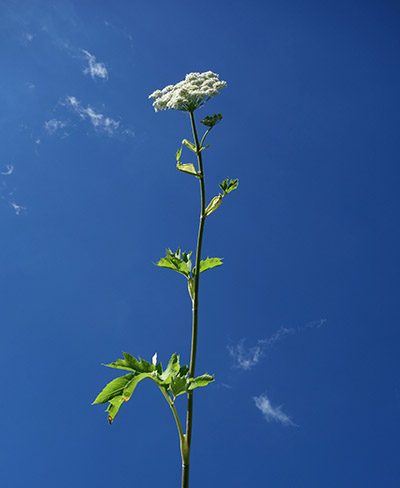 Two non-native grasses, abundant on roadsides and in grassy fields. Farmers plant them; restorationists try to control them because they are non-native and aggressive. Naturalists frequently rush to the ligule (a small, translucent membrane where the leaf separates from the stem) for identification, but these are often torn and distorted. I turn to the infinitely easier flowering architecture.

The flowering structures of both species are borne on slender wires at the top of the grass. The outlines they form can be distinguished at a distance. The only difficulty is that while reed canary spreads its flowering heads open widely during flowering, the heads may contract a week later, altering their appearance.

Orchard grass (Dactylis glomerata): First of the two grasses to rise in the field, and to flower, usually in late May. Knee- to waist-high. When in flower, the grass typically has just one outward-branching "limb" followed by a distinct space, then a few other "branches" with flowers. An outline drawn around all of the flowering structures at top of the stem would be almost as wide as it is tall.

Orchard grass is planted for forage and hay. It grows best on mesic soils. Often found persisting in fields planted to prairie, it is of low concern because fire and competition will lessen it over time. 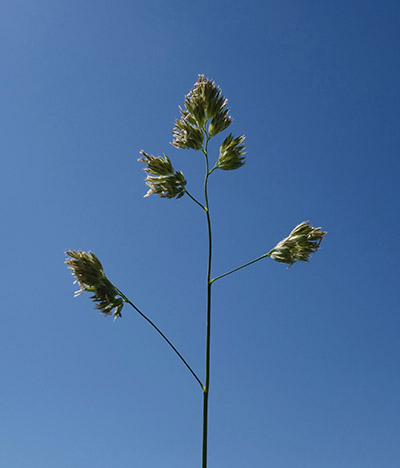 Reed canary grass (Phalaris arundinacea): Second to rise and bloom, usually about a week after orchard grass (early June). Waist- to head-high, but reclining later in the summer. The flowering heads have many (8-14) branching wires more or less of similar length, appearing to form a ladder that gradually closes to a point as you follow it upward. An outline drawn around all of the flowers looks like a spearhead. The heads are widest during blooming, after which they contract to a tapered spear outline for the rest of the season.

Reed canary is routinely planted agriculturally on any damp soil. Spreads aggressively, voluntarily, anywhere silt is deposited, especially along stream banks and in any formerly tilled, sunny, floodplain. Reed canary is a high concern to restorationists and is hard to eradicate. 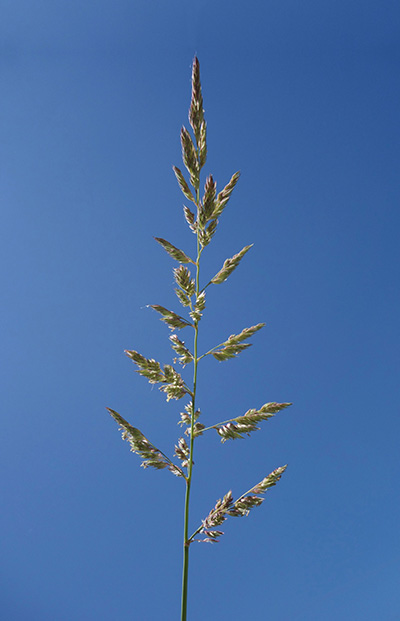