This Month in the Driftless, September 2020

Here's a recap of Driftless Area phenology from the past month, written by our very own Pat Trochlell.  Pat's inspiration comes from her career as a wetland ecologist with the Wisconsin DNR.  She and her husband, Ken Wade, live near and are stewards of TPE's 30-acre Parrish Oak Savanna, a diverse woodland ecosystem of over 240 native species.

The berries of the early horse-gentian (Triosteum aurantiacum) are turning a brilliant red-orange.  This species can be easily identified by the 2- to 4-foot hairy stems, opposite leaves, and 2 to 4 flowers in the leaf axils whose fruit turns from green to red-orange by early fall.

Besides early horse-gentian, another Triosteum species is found in Wisconsin: the late horse-gentian (Triosteum perfoliatum).  Both species can be found in open woodlands on rich soil.  The flowers bloom from May to June and are pollinated by long-tongued insects, especially bumblebees.  Caterpillars of the snowberry clearwing moth feed on these plants. 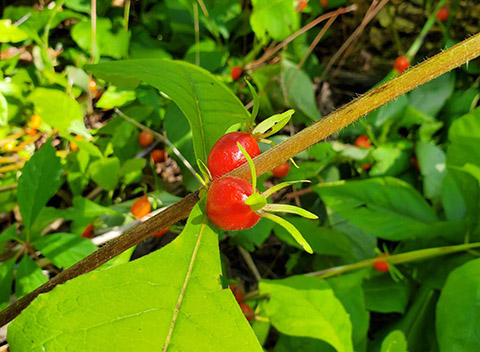 The name horse-gentian may refer to the coarseness of the plant and to the flowers, which are 5-parted with opposite leaves and similar to flowers of the gentian family.  But these species have other names including wild coffee, feverwort, and Tinker’s-weed.  The reference to wild coffee is sometimes attributed to having been used as a coffee substitute, but that claim is not well-documented.  Another explanation is that the fruits when dried appear to look like coffee beans.

The name feverwort comes from the use by First Nations people who used the plant medicinally.  The Meskwaki (Fox) called this plant “tcekwakwate”.  The roots were used to treat fevers and snake bite, heal sores, and soak sore or swollen feet.  The plant’s medicinal use was noted by Dr. Tinker of New England who used it in his medical practice, hence the name Tinker’s-weed.

This week’s cool, rainy weather has meant that more migratory birds can be seen traveling through our area -- especially flocks of common nighthawks, warblers, and vireos.  Prior to the cool weather, large numbers of common green darner (Anax junius) dragonflies passed through area wetland meadows during their migration. Common green darners are hummingbird-sized dragonflies that you may see flying low through these areas and feeding as they make their way south. Migrating flocks can be impressive in size, numbering in the hundreds of thousands.

Another interesting insect we found this week is a caterpillar of a species called brown-hooded owlet moth (Cucullia convexipennis). This species of moth, like so many, is somewhat non-descript. It is a pale brown color with its most distinguishing feature being a brown tuft of hairs over the head that is said to resemble a mohawk. In contrast, the caterpillar of this moth is called the calico paint caterpillar and is very colorful. The caterpillar feeds on asters and goldenrods. 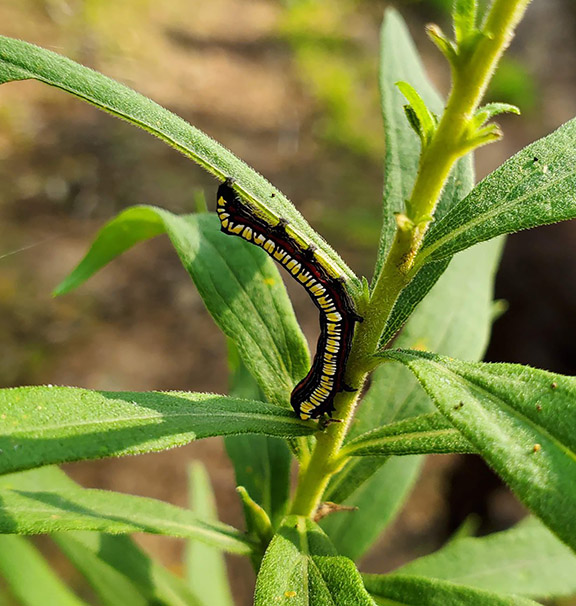 If you are looking for colorful blooming flowers, wetlands are particularly good places to be at this time of year. Asters and goldenrods are plentiful and reaching their peak. Another late-blooming wetland plant is the American grass-of-Parnassus (Parnassia glauca). This species is a characteristic fen species which grows in areas of upwelling calcium- and magnesium-rich groundwater.  Areas where groundwater flows through dolomite can create conditions favorable to this and other fen species. Calcareous fens are a rare wetland type that is particularly vulnerable to threats from human activities. TPE’s land protection actions are helping preserve and restore several calcareous fens.

Asters and goldenrods are at their blooming peak. Shades of purple and yellow complement each other in woods, prairies, and wetlands.  So it wasn’t unusual to see a man photographing flowers at Parrish Oak Savanna this week.  What was unusual is that he came from Michigan to Wisconsin specifically to find asters.  He correctly identified the flower he was photographing as Drummond’s aster (Symphyotrichum drummondii), an uncommon plant in Michigan. 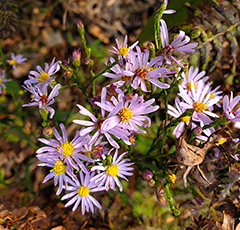 Some people find asters to be challenging to identify to species level, but a few key factors can help immensely.  The color of the aster can narrow down the list of species.  Habitat is another key factor, with some species found only in wet areas while others prefer dry areas.  Some like shady forests and others like sunny open slopes.  While there are many species in Wisconsin – 26 by my count – these two factors can help key in on the correct species.  Patience, a good plant book, and a lot of time outside help too.

Another flower seen this week is a delicate orchid, the Great Plains lady’s-tresses (Spiranthes magnicamporum).  This small plant grows to only about a foot in height with half-inch flowers, but it is a spectacular plant nonetheless.  Its almond-scented white flowers spiral around the stem. Its small stature makes it easy to miss, but it is well worth looking for in moist to dry areas in calcareous soils. 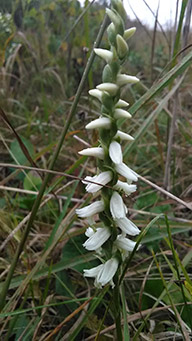 A new species discovered this week in our local oak savanna is the milksnake (Lampropeltis triangulum).  Milksnakes are relatively common in Wisconsin.  They live in oak savannas, upland hardwoods, prairies, and old woodlots and pastures.  They grow to about 3 feet long and are known to mimic venomous snakes but are harmless to humans.  They feed mostly on rodents, making them a welcome inhabitant near homes.

Asters, part two: New England aster is arguably the showiest aster and one of the most beautiful fall blooms with its large magenta and deep purple flowers.  Compared to this species, other asters’ beauty is more subtle.  One of my favorite local asters in southern Wisconsin is Short’s aster (Symphyotrichum shortii).  You have to search to find these asters, but when you find them lining a shady roadside or growing in an oak woodland, they light up these dark places.  Short’s aster is distinguished by its smooth-edged leaves with a heart-shaped base, plus dark lavender flowers that are about an inch and a half across.  Their preferred habitat is southern dry-mesic forests, mostly in oak woods in our area.  Interestingly, this species was not listed by Curtis as prevalent in oak openings, but the Atlas of the Wisconsin Prairie and Savanna Flora notes that it has characteristics of classic savanna species. 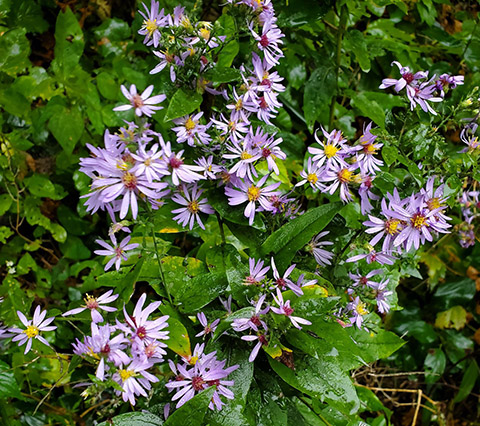 You’d think that with all the lovely-hued purple, pink, and lavender asters, white asters wouldn’t be as noticeable.  There are some exceptions.  Calico aster (Symphyotrichum lateriflorum) can be found in dry to wet shady woodlands and the plants can have many small flowers.  The disk flowers in the center range from yellow to purplish, hence the common name which refers to their similarity to calico fabric.  Another aster that can be equally impressive is heath aster (Symphyotrichum ericoides).  It is a species of dry-mesic prairies.  Its very small flowers and short, narrow linear leaves are not very showy individually, but the sheer number of flowers on a plant can make this a striking flower in the fall prairie landscape.

Rare plants, part two: Another interesting find this week started out as a barely visible small spike that eventually produced tiny white flowers.  Close examination of this plant revealed that it is a lady’s-tress orchid.  This particular species turns out to be an oval lady’s-tress orchid (Spiranthes ovalis).  It is rare in Wisconsin, rated as Special Concern, and is a State Threatened species in Iowa and Michigan.  This is one of the last orchids to bloom, beginning from September into early November in some areas.  It inhabits moist to dry thickets, open woods, and prairie-like habitats.  The presence of this rare orchid is another example of how roadsides and other less pristine habitats can provide habitat for conservative plant species.  Look closely as you walk. There are still a lot of rare plants out there to find. 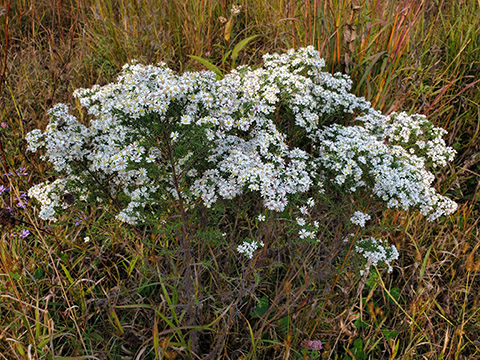