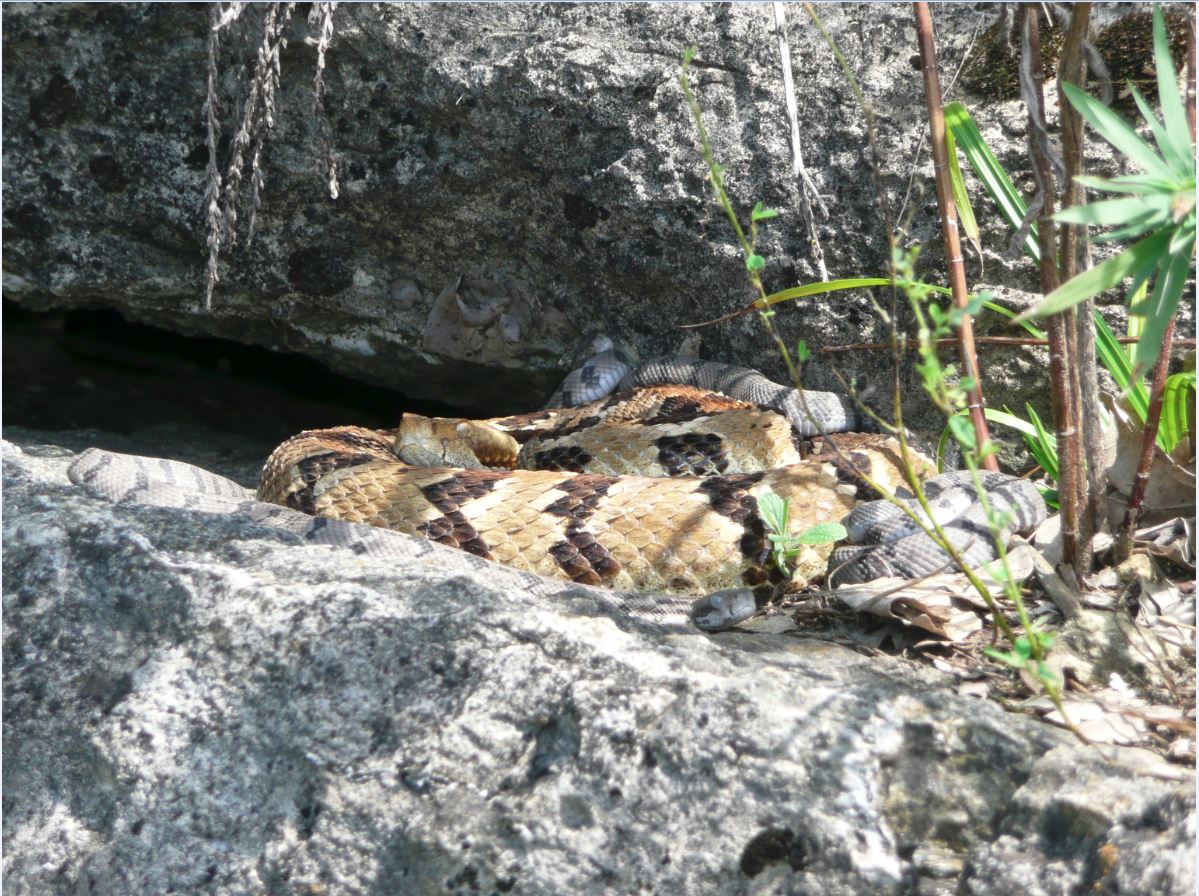 Historically significant and emblematic of the wildness that once existed along the towering bluffs of the Mississippi River, the timber rattlesnake (Crotalus horridus) continues to survive in isolated pockets. Revered and respected by Native Americans, with some tribes calling it “Grandfather,” it was vilified by European settlers and now only thrives in the most remote mountain ranges of the Eastern states.

Photo: Mother and her litter at a birthing rookery. The neonates (newborn snakes) are grayish and tucked in and around their mother. Photo by Brian Bielema

After centuries of persecution and wanton killing, a viable population still exists in the Midwest, and it’s up to us to protect it. Stories maligning and demonizing the rattlesnake don’t fit with the creature I’ve studied for 30 years. I hope to show you why Benjamin Franklin was right when he penned a multi-point document in support of using the rattlesnake as the symbol of our new nation, calling it “an emblem of magnanimity and true courage.”

First and foremost, timber rattlesnakes have a passive temperament. They rely on cryptic coloration to go unnoticed and will almost always allow a human to pass by, maintaining silence even when a foot is placed well within striking distance. Their venom, needed to secure prey, wouldn’t be wasted on an animal the size of a human. Even when stepped on, their usual reaction is to rattle and crawl away.

If threatened, they may strike defensively. The vast majority of bites are known as “illegitimate,” because the wounds were inflicted during attempts to kill or capture them. Often, these defensive strikes inject no venom, resulting in a “dry bite” with no systemic effects.

Timber rattlesnakes are ambush predators. They brumate (inactive but not hibernating) in rocky dens from November to March and are active from April to October. This can vary, however, and with the warming climate, emergence generally comes earlier and ingress to dens later.

Upon emergence, rattlesnakes seek open canopy rocks in the vicinity of their dens, or move to a foraging site to await their first, and often only, skin shedding (molting) of the year. Months in the den often result in skin lesions that are removed by this molting. Snake Fungal Disease has been found in the timber rattlesnake, which produces severe lesions, mostly on the head, but gratefully hasn’t been lethal as it has with Illinois’ other rattlesnake, the Eastern massasauga.

Each molting adds a segment to the snake’s rattle “string.” Molting may take place a second time later in the summer or fall. After the rattlesnakes have completed their post emergent molt, non-pregnant females and males search for ambush sites to forage for white-footed mice, Eastern gray squirrels and Eastern chipmunks in closed canopy forests with many fallen logs or edges of grassy fields where voles (prairie and meadow) are the target. As an opportunistic predator, other mammals and birds also are taken as size permits. 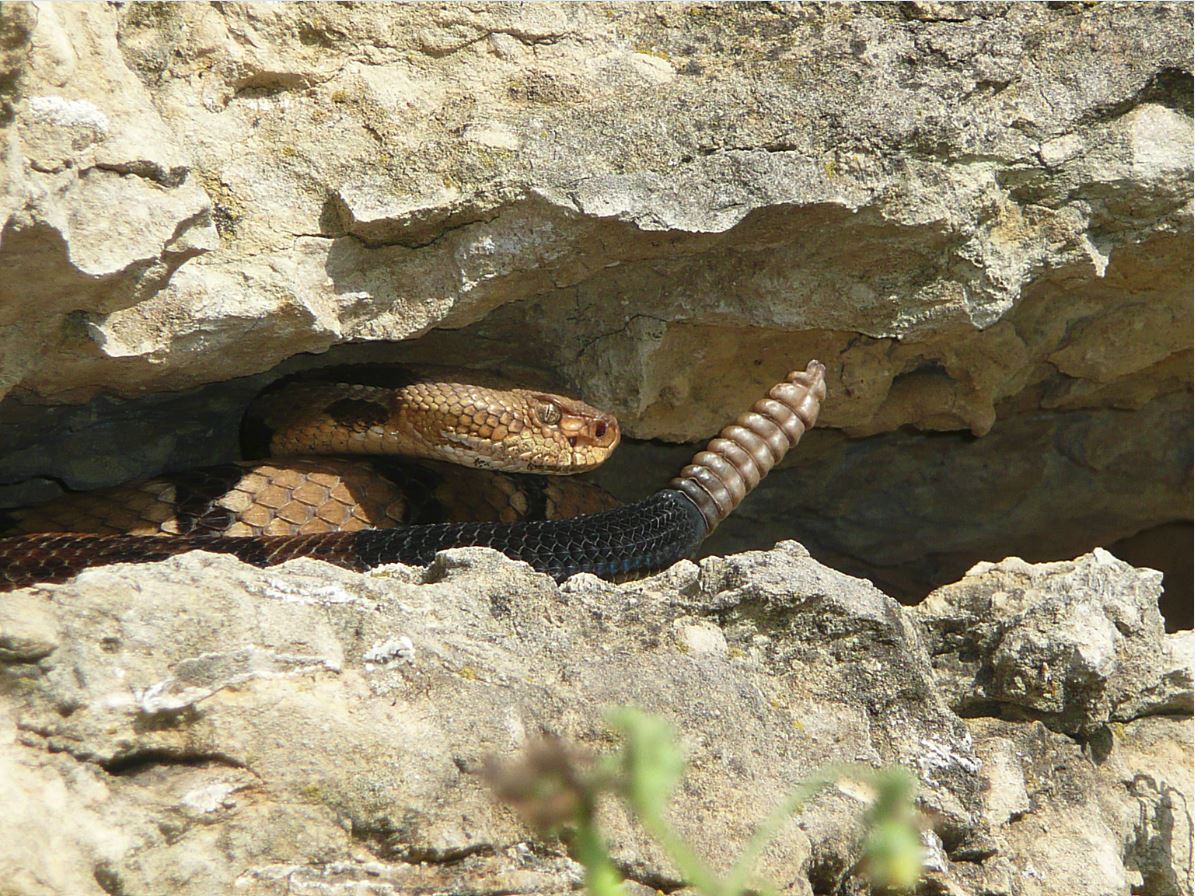 Ambush sites are chosen by sampling fallen logs for the presence of mouse runways by “tongue flicking” the tops to detect fresh scents. This technique also is employed on the sides of trees that may harbor gray squirrel nests. Once an ambush site is chosen, the rattlesnake rests its head on the side of the log or against the base of a tree, or it lies coiled next to a vole run.

In this position, three senses come into play to direct the strike. With the jaw resting on the log, it can feel vibrations from a prey animal approaching. It also has good peripheral vision, but the most remarkable sense organs are the heat detecting pits just below and slightly forward of the eyes. Warm blooded prey is “seen” as a stereoscopic image not unlike that produced by a second set of eyes. This second sight allows the rattlesnake to strike accurately in total darkness. When a small mammal such as a mouse is struck, the snake immediately pulls back, avoiding injury from the wounded animal.

The envenomated mouse wanders off and succumbs to the venom. After a brief wait, the rattlesnake follows the scent trail, finds and swallows it headfirst. Remarkably, the smell of the envenomated prey is distinctive, and the rattlesnake can track it through a maze of scent trails laid down by other mice. When birds are struck, the snake holds on until the venom takes effect as a wounded bird would most likely fly, leaving no scent trail and would be lost. The ambush position may be maintained for many hours, and the snake may actually fall asleep before approaching prey awakens them. It’s recently been discovered the prior presence of other rattlesnakes may provide “public knowledge” of successful sites, drawing others to them by scent.

One surprising benefit rattlesnakes provide humans is that eating their main food species, white-footed mice, reduces Lyme disease. Up to 90% of white-footed mice carry the Lyme bacteria, and tick larvae and nymphs become infected by biting the mice. If the mouse is consumed, both the disease carrier and its tick load is eliminated. It’s estimated a single rattlesnake may consume more than 1,000 ticks annually, thus reducing Lyme disease in rattlesnake inhabited areas.

For pregnant females, life is quite different. They have built up fat reserves in the year or two prior and rarely feed during pregnancy until they give birth. Mating has taken place the previous summer to early fall, and both sexes may have multiple partners. This results in multiple paternities in some litters.

Sperm is stored by the female over the winter, and the eggs are fertilized the following spring after ovulation. Rattlesnakes give birth to live young, not eggs. Pregnant females seek out open canopy, usually large table rocks, logs or even man-made structures, where they remain until giving birth in late August or September. Some of these sites (known as birthing rookeries) are used by multiple females and may serve for decades as long as the canopy remains open, and the structure is unchanged.

Some females leave the rookery to give birth in sheltered areas nearby, but the majority have their litters at the gestation site. Fidelity to a gestation site finds females returning for successive pregnancies.

Due to the fragile population in the Midwest, it’s difficult to easily recover from the loss of even one mature female. Many females have a single litter in their lives, and few have two or three litters. In my 30-year study, lifetime reproductive events break down as follows: 48.4% had a single observed event, 29% had two events, 9.7% had three, 6.5% had four, and just one female each had five and six litters in her life. Reproductive cycles for females with multiple pregnancies are usually two to three years.

Reproductive maturity locally may occur as young as 4 years. I witnessed mating of a female with a complete rattle string (when the end button is present on the rattle, age can be estimated with some accuracy). Several experts agreed with this age after viewing photos. If she became pregnant the following year from this mating, she would have given birth at age 5. The Eastern populations mature slower and may be as old as 7-9 years before being able to reproduce.

After giving birth, some mothers remain with their neonates (newborn snakes) until they complete their post-natal shed, usually within 10-14 days. But most females I’ve observed leave the newborn snakes after a few days of recuperation. (Pregnancy exacts a high cost, and postpartum females are extremely emaciated. Some don’t recover.) Upon emergence the following spring, they remain in poor physical condition with visible loose skin folds on their depleted bodies.

The young (litter size 1-11, mean of 5.6) are born with a gray coloration, pre-buttons on their tails and are about the size of a fat lead pencil in length and girth. After their molts, they look more like the adults in color and possess a button. Each successive shedding adds a segment below the button. When rattles reach lengths of five or six segments, they increasingly become prone to breakage. Old rattlesnakes rarely maintain their end buttons, and the three-lobed broken end segments can easily be distinguished from buttons.

Younger snakes tend to have tapering rattles, and charts prepared by several researchers can help determine age. Timber rattlesnakes are long-live, with some reaching 45 or 50 years old, and by then have straight-sided rattles with almost no taper.

As we learn more of the secret lives of timber rattlers through radio telemetry, videography and innovative experiments, we discover abilities beyond our previous understanding. Sociality and kinship recognition are present and important.

Newborn snakes have the ability to find a den site within days of birth. With the mother gone, securing her own meal after her long fast, the neonates leave the birthing site, forage for food (but the remaining yolk allows them to overwinter without securing a meal), and if luck is with them, find the scent trails of older rattlesnakes moving back to the den. The young imprint on this den site and return here for the rest of their lives. In some cases, they may use another den, but there is high fidelity for the initial den. In this manner, some dens have been used for decades and probably centuries as successive generations continue the pattern. Their “mental maps” allow them to travel far from the den in loops that bring them back in the fall.

Although it’s difficult to determine exact numbers of such a secretive and cryptic species, it’s safe to say timber rattlesnakes in the Midwest need protection. In my native Illinois, it’s listed as a threatened species and afforded legal protection. In the Driftless Area of Northwest Illinois where I study, I know of only three viable populations. I consider a viable population to have 50-100 snakes. Admittedly, I haven’t surveyed this entire corner of the state but would be surprised if there were more than six viable populations left. Throughout its Upper Mississippi River range, most populations are isolated and losing ground as development encroaches.

It took a commitment to save the bald eagle, eventually chosen as our country’s emblem. Timber rattlesnakes, truly American symbols of wild blufflands, deserve to have protection for their remaining populations, too, lest we lose them forever.

For additional citations for this story or for any questions, I can be reached at [email protected]

Brian has a bachelor's degree in zoology from the University of Illinois, and master's in biology from Western Illinois University. His research on timber rattlesnakes began 50 years ago, and he co-authored the Illinois section of the Timber Rattlesnake Conservation Action Plan for the U.S. Some dens are located in hill prairie rock outcrops such as this. Photo by Brian Bielema