The Vale Prairie has over 70 species of native prairie plants, some of which are endangered, threatened and of special concern here in Wisconsin. This remnant is also home to the federally threatened prairie bush clover, a very rare plant found only in the upper Midwest!

The state endangered pink milkwort is also found here. This remnant is the only protected site in the state where this plant has been found as of 1999. Other outstanding qualities of the site are its prairie smoke and shooting star displays.


Access & directions
From Albany, go west on Mineral Point Road to Purinton Road. Continue west to Schneeberger Road, turn right (north) and go about 4/10 of a mile, and park along the road.  Walk in to the west of Schneeberger, on a rutted dirt track along a fence line, a quarter-mile on our narrow easement between crop fields.
Map of site
Google Maps 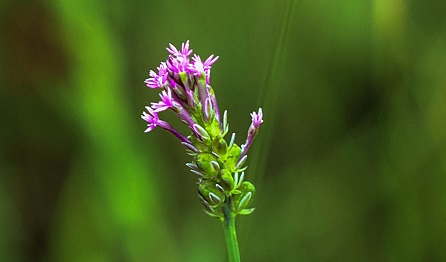 The remnant was first located in the mid 1970's. Back then there was no such thing as The Prairie Enthusiasts. There was just a small bunch of guys who loved prairies and liked to burn them, then drink beer and talk about preserving remnants. The Vale Prairie was managed for about five years, then left to its own until 1992, when the Southwest Chapter purchased the 4.5 acre remnant and 11.5 acre buffer for a total of 16 acres. That was truly a fine purchase. The site was named the Vale Prairie after the owners, Harold and Crescent Vale, who were in favor of its protection and restoration. In the winter of 1993, TPE volunteers and Wisconsin Conservation Corps crews cut and stump treated all woody vegetation on the site. After eight years of work, the area is recovering nicely. Part of the restoration plan involved replanting an area of 1.5 acres in the southwest corner of the property because smooth brome had completely taken over. Our plan was to spray it with Roundup, collect seed, and replant. The spraying was done, and several months later, to our complete amazement, most of the regrowth was of prairie plants, apparently released to grow when the brome was killed! It was decided that the buffer areas would serve as a sort of genetic refuge for disappearing species from within Green County. Two species that have been nearly extirpated in Green County are Wild Quinine and Pale Purple Coneflower, so seed was collected from one coneflower site and three quinine sites and sown there. We now have a healthy and growing population of these plants. In addition, part of the restoration plan involved expanding the remnant size, but only by using seed from the remnant. To date, a strip 30 feet by 400 feet has been restored on the south edge, and another area on the west end, measuring 45 feet by 100 feet, also has been restored. Areas that were heavily shaded by dense trees and brush have been mowed annually with a sickle bar mower. These areas are difficult to work with due to the fact that birds used the trees as perches for years, and as we all know, where there are birds, there are bird droppings, usually laced with seeds of everything except prairie plants! Once the shady trees are gone, these seeds grow like crazy. Presently the remnant is surrounded by old hayfields dominated by orchard grass. It does serve as a grassland habitat for some bird species, but our hopes are to plant these areas to prairie as well.